AAI is inaugurating its Art Gallery by participating in the first Assyrian Genocide Remembrance Event in the United States on August 7th, 2017, 6-7:50pm at Cal State University Stanislaus (CSUS) in Turlock CA.

CSUS will host a program of remembrance and reflection at the campus’ Mainstage Theatre. Special-guest speakers include Dr. Stacy Farenthold, Director of CA State University Stanislus (CSUS) Modern Assyrian Heritage Project; Mona Malik of the Assyrian Aid Society of America; and Sabri Atman, world-renowned Founder and Director of the Assyrian Genocide Research Center. There will be a special screening of Rosie Malek-Yonan’s An Assyrian Exodus; spoken poetry by Rabi Yosip Bet-Yosip; and an invocation by Assyrian Church of the East Bishop Mar Awa Royel.

CSUS asked AAI if we would curate an exhibition of works by Assyrian artists. And so we are! Our experienced Art Gallery curator, Adria Cumono, has arranged an exhibition from August 7th to the 18th 2017 at CSUS’s beautiful gallery to display the works by Ninos Chammo, Jelbert Karami, Fadi Khiyo, and Nahrin Malki. See their bios on this website and on AAI’s Facebook page so you can immediately see why they’re perfect for this important event.

The public is welcome to visit the gallery, so if you’re in the area we hope you will.* And by the way, all four artists’ works will be included in our highly-anticipated Exhibition Gallery at the 84th Annual AANF National Convention this Labor Day Weekend in Scottsdale, AZ. 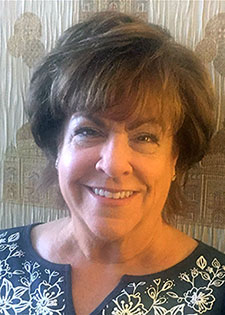 It is all about the leader…. Adria Cumonow

AAI has hired one of the most qualified, experienced, and talented Art Curator, Adria Cumonow to lead the Assyrian Fine Art gallery exhibitions during Assyrian Genocide Remembrance on August 7th, 2017 at Turlock, CA, and Assyrian National Convention during Labor Day weekend, August 31 to Sep 4, 2017, at Scottsdale, AZ.

Adria is one of the best-known and most highly-regarded figures in the art industry. She’s been Regional Gallery Director for the world’s top three fine and decorative contemporary-art publishers. She’s acquired works for innumerable private and commercial designers, architects, and builders, and placed major pieces in the corporate headquarters of companies including Sony, Mattel, Gillette, State Farm, Nestle, Citicorp, IBM, Procter & Gamble, and American Airlines. She’s done extraordinary one-of-a-kind projects like filling a Royal Caribbean ship with paintings and sculpture by legendary Hollywood and music stars. She’s coordinated dozens of connoisseur art events. She was Program Development Associate for Global Fine Arts, the cruise industry’s largest in-house art-auction company, consulting on product acquisition and framing for its operations on Princess, Carnival, Holland America, and Cunard. And for the past 15 years she’s been president of Argos Publishing, an independent art-consulting firm specializing in the acquisition of contemporary and 19th-Century works for private and corporate clients.

Adria’s services have been invaluable for AAI and Assyrian artists that are in contact with her. She has set Exhibition Gallery participation requirements, has been working tirelessly with Assyrian artists to determine the most appropriate art of each artist’s works to be include during exhibitions. Adria has helped edit or create artists biographies, has determine and recommended the fair-market value of each artist’s works, as she has helped to create a Certificate of Authenticity for each artwork to be included with art sold to Assyrian art collectors. Adria has consulted with event organizers to pick exhibition location, will design the Exhibition Gallery space to position/hang artwork, as she will supervise the gallery installation and breakdown.

In the course of traveling the world in search of art and artists, Adria has often discovered the work of up-and-coming painters, printmakers, and sculptors. When she was introduced to the Assyrian artists by AAI, she was instantly intrigued, and she’s now extremely excited to be helping to bring Assyrian artists into the spotlight.

This is an amazing opportunity for Assyrian artists to know Adria, and for public to follow Adria’s advice on how to become an Assyrian art collector. Attend AAI’s Fine Art Gallery exhibitions and witness how effectively Adria is promoting Assyrian art and each respective Assyrian artist.

Fadi Khiyo is an Assyrian painter known for his unique, large-size expressionistic portraits. Born in the Khabour Valley of Syria in 1982, he graduated from Al-Hassake Institute of Arts in 2002. He had numerous exhibitions before finally earning his certification from Al-Adham Esmael School of Abstract Art in Damascus.

Despite the civil war in Syria, Khiyo refused to flee the country; but ISIS kidnapped many of his relatives from Khabour in 2015. When they were released in 2016 he fled with his family to Lebanon where he is now a refugee, continuing to paint, awaiting migration documents to the West.

He doesn’t like to give his paintings titles nor try to explain them. While he rarely speaks about the motivation of his art, the sudden death of his father at a young age triggered a radical shift in his style, as did living through the modern Assyrian genocide where he “started seeing people’s inner conflicts and fears on a deeper level. These paintings are how I see them now. The face mirrors the person’s soul.”

His most impressive work focuses on portraits of unknown people. The disoriented facial expressions, limited use of color, and strong emphasis on form are its hallmarks. After a long shipping process from Syria, only five of his paintings are available in the U.S. 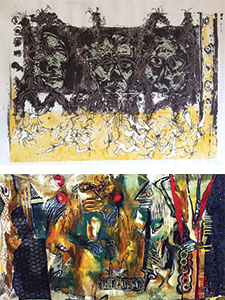 Born in Syria, her country has been the source of her techniques and materials, and the central theme of her work: Suffering.

Narhin Malki completed her graduate art studies in Kamishli in 1993. She emigrated to the Netherlands in 2001 and entered the AKI Kunstacademie in Enschede in 2007. Though she graduated with a specialty in modern painting, she had begun early on to use stamping, manual graphic printing, and different textiles, employing stamps, symbols, and archetypes of Mesopotamian origin.

She started off working in black and white, with shades of grey supplying the metaphorical nuances of humanity and morality. Eventually she came to add strong colors, though black always dominant, enabling her to communicate the whole and the parts of her story, paintings within a painting.

Of her central theme, Malki says, “Suffering does not discriminate. I show this through my personal experiences of grief, images of the downtrodden, and violations of human rights.” By combining ancient techniques with modern collage, she brings together her dreams with her reality, her history with her present, and her people with herself.

Of Assyrian descent, Ninos Chammo grew up in another land rich in history: Italy. At 16 he began a seven-year art apprenticeship in Florence, gaining his understanding of painting at the Academia Della Belle Arti, becoming proficient in frescoes and monuments at Raymondo Riaci Atelier, discovering a passion for sculpting in Bronzi a Cera Persa at Bronzi Di Firenze, and creating wood sculpture and papier-mâché masks at Bini Alfonso. After a notable tenure designing sterling-silver jewelry on the Ponte Vecchio he began doing so not long ago in New York.

Chammo’s works have been featured in galleries throughout Europe and the United States. His life is filled with travel, allowing him to draw inspiration far and wide. He describes his art as a fusion of cultures. From Gilgamesh’s immortality to Dante’s Inferno to Gibran’s philosophy, he seeks to expose viewers to universal emotions and experiences. Chammo readily puts into words the motivation of artists like himself: “I was chosen by art. It’s not what I do, it’s who I am.” 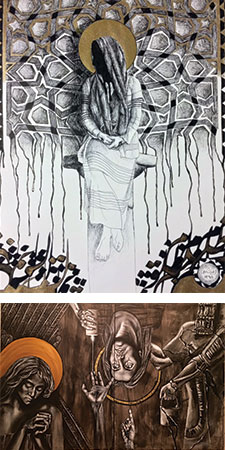 Born in Tehran in 1985, Jelbert Karami began painting at 14 after seeing a work by Sohrab Sepehri at the Tehran Museum of Contemporary Art. He studied at Mana, an art academy in Tehran, mounting his first solo exhibition there in 2005. At 20 he committed his life to art, starting to paint professionally, gaining a reputation, teaching in numerous schools, and holding workshops in private clubs in the city.

The challenges of being an artist in Iran include extreme censorship of subject matter; and while an Assyrian artist can become well known, there are eyes on him or her at all times. Though he had more than a dozen highly-acclaimed solo exhibitions and was featured in a cover article in a national art magazine, he left his homeland for Vienna in 2015, stayed a few months, and came to the United States in 2016.

Karami’s works reflect both his spirituality and his love for the Assyrian nation, his focus on Middle-Eastern culture and human-rights issues, especially the oppression of women. He has said that “seeing my history vanishing is devastating” and has been helping to preserve it by creating dramatic wood carvings based on Assyrian palace bas reliefs. He believes that humanity can ultimately become a true community by reaching past darkness for light, and “for me that light came through art.”